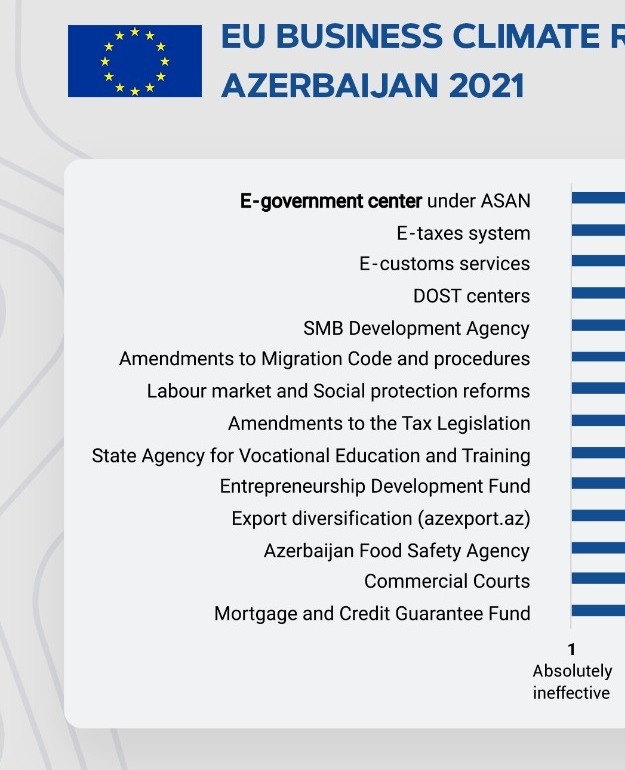 “ASAN Service”s e-government center has been elected the leader in an international survey.

“The EU Business Climate Report – 2021” has been published. About 400 European companies operating in Azerbaijan took part in the survey conducted within the report. The companies represent EU member states, the European Free Trade Association, and the United Kingdom. The surveys cover business, investment climate, reforms, and other traditional areas.

The main goal of the report is to assess the latest trends and reforms in the business environment in Azerbaijan from the perspective of European companies operating in the country.

According to the report, the E-GOV Development Center of the State Agency for Public Services and Social Innovations under the President of the Republic of Azerbaijan was selected first for the effectiveness of local reforms.

According to the report, European companies have chosen “ASAN service” as a leader in digital reform since 2016 and it is noted that the ASAN service and the E-GOV Development Center operating under, significantly reduce bureaucracy, and speed up government procedures, as well as eliminate the risks of corruption.

The report contains solutions for the activities of employees created by "ASAN service" during the COVID-19 pandemic, as well as positive comments about the ABAD, "ASAN Visa" project, emphasizing the clarity of procedures, and customer-oriented approach.

The document also notes that "ASAN service" has implemented the “Azerbaijan 500 ASAN Startup Program”, which provides support to increase the knowledge and skills of Azerbaijani startups, as well as facilitate access to investment. It was noted that this program contributes to the development of innovation ecosystems and infrastructure.

At the same time, we note that the "ASAN service" has taken a leading position in the ranking of local reforms in 2019-2020.