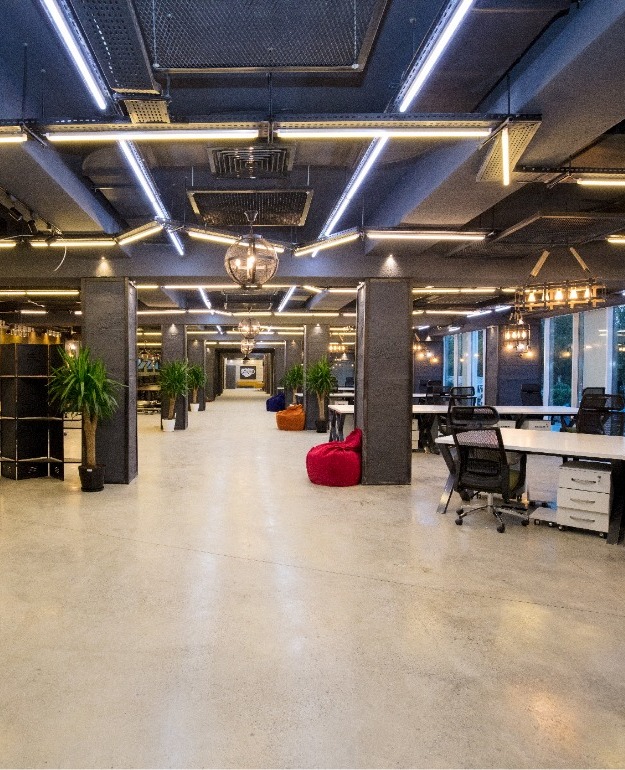 The head of state cut the ribbon symbolizing the opening of the administrative building.

The President`s Assistant for Work with Law Enforcement Bodies and Military Issues, department head Fuad Alasgarov and chairman of the State Agency for Public Service and Social Innovations under the President of the Republic of Azerbaijan (ASAN service) Ulvi Mehdiyev informed President Ilham Aliyev and first lady Mehriban Aliyeva of the conditions created in the building.

It should be noted that in the five-story building of the "Electronic Government Development Center" public legal entity, located at Ataturk Ave.89, Narimanov district, has all the conditions for the organization’s activities at a high level.

The building will feature the INNOLAND Incubation and Acceleration Center as well as the IT Training and Education Center.

President Ilham Aliyev familiarized himself with the INNOLAND Incubation and Acceleration Center. INNOLAND is an incubation, acceleration and research center created to develop the private sector, promote innovation and expand the startup movement both in Azerbaijan and beyond its borders.

INNOLAND - includes Co-working, Incubation, Acceleration and IT Training and Education Center. The "Co-working " center here is a place where startups, programmers, and business people combine the most profitable and many opportunities for individuals working in the field of innovation. "Co-working" center, which operates at "INNOLAND", has 24-hour access to the 7 days of the week, high-speed internet, unified data desk and mentor support.

The IT Training and Education Center is a place where young people will be taught programming, information technologies, and coding skills. Artificial intelligence, robotics and programming languages are preferred in the center. Classes are held every three months in “bootcamp” format. During the incubation period, startups are helped to formulate their ideas. During this period, the four-year idea competition is announced annually in the directions defined. According to the relevant criteria, the idea of a predetermined number is accepted. Initial versions of successful shaped ideas during the incubation period are passed to the acceleration stage to test the prototype. At this stage, the team is regularly shown mentor support. Startups in the Center will benefit from INNOLAND's innovation and ICT activities during the Incubation and Acceleration period.

It was reported that the “Wattbooster” mechanism boosts the useful electricity supply and generates more energy from the electromagnetic field. As a result, energy savings of electrical equipment are saved. The device is currently being designed to reduce the consumption of electric energy for mobile operators' antennas.

The spinal apparatus "Lia" controls the state of the spinal column and creates the right arm. Lia, consisting of a microcontroller and two sensors, hangs on the shoulder, helps to repair the spinal column without feeling any discomfort after at least 3 weeks. The sensor controls the position of the shoulders and checks the accuracy of the posture. If the user's position is in the wrong state, the notification is received and the remainder is recalled.

The invention "Safee" was designed safely on the road, mainly for cyclists in the evening. The device reflects the safety signs on the back of the bicycle driver. The rare device is of great interest in the world media since its first production. Thus, articles on the project were published in the BBC, Mirror, Yahoo and other media outlets, and he was awarded several global awards. This device, which will start mass production in the near future, has received hundreds of orders from a number of countries.

"Wetravel" is a payment network for tourism companies. Network-based companies can exchange money with the lowest commission. Hotels, hostels, airlines, travel agencies and other companies can take advantage of the platform. "Wetravel" enables users to easily access traveler's data, ease of payments, and international payments with the lowest rate. Through the platform, thousands of visits have been made to more than 80 countries.

Namo Media is an online advertising management system. Fox, ESPN, such as advertising news sites, are being implemented with this system. Namo Media was estimated by Twitter in 2014 worth $ 50 million.

These startups have been developed by Azerbaijani founders and are aimed at successfully entering the global market.

Recall that the use of information and communication technologies in state structures and public services and application of innovative solutions is one of the priorities of state policy in Azerbaijan. Establishing a nationwide Internet network, promoting open government has led to an increase in the number of Internet users, ensuring publicity and transparency of information. In addition, in recent years, it has become the main goal of full electronicization of state services, analytical analysis of state information resources and the creation of opportunities for public and private sector to deliver transparent, operational and resource-saving services to citizens. All this required the introduction of a single approach and standards in the formulation, management and integration of state information resources and systems and speeding up the transition to digital government. President Ilham Aliyev signed a decree on March 14, 2018, on "Measures for development of e-government and transformation to digital government" for the rapid implementation of these works. In order to implement state policy and regulation in the field of e-government with this Decree, a legal entity was created under the subordination of the State Agency for Citizens Service and Social Innovations under the "Electronic Government Development Center".