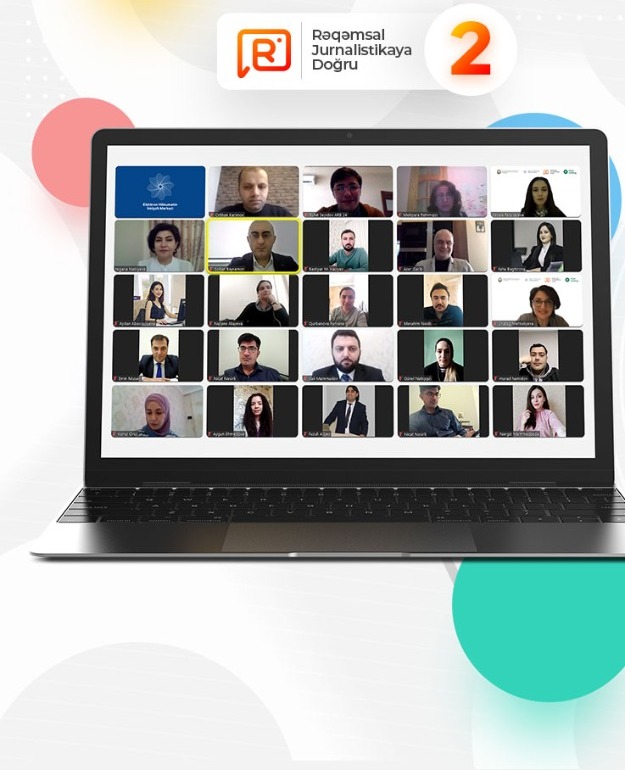 The 2nd “Towards Digital Journalism” program has finished

On December 25, 2020, the 2nd “Ragamsal Jurnalistikaya doghru” program (“Towards Digital Journalism” program) organized by the E-Gov Development Center (EGDC) of the State Agency for Public Service and Social Innovations under the President of the Republic of Azerbaijan and sponsorship of Pasha Holding has successfully been completed. Representatives of EGDC, members of the jury, trainers and journalists participating in the program attended in the online meeting dedicated to the closing of the program.

Representatives of EGDC speaking at the event and members of the jury spoke about the building of e-government in our country, as well as emphasized the important role of the media in raising awareness about digitalization. In the first part of the two-part program, trainings were organized on digital journalism, latest trends in the ICT sector, e-government projects, and e-services. In the second stage of the program, a writing competition was held among the participants who successfully completed the trainings. Participants prepared articles for the competition based on journalistic research, and these articles were evaluated by the jury on the basis of special criteria. In the competition, the first place winner Nijat Nasirli, the second place winner Rufat Seyidov and the third place winner Yegana Nabiyeva were selected from the media representatives. The winners were awarded 1,000 AZN, 700 AZN and 500 AZN, respectively. In addition, participants who successfully completed the program were awarded e-certificates by EGDC.

The main target of the “Ragamsal Jurnalistikaya doghru” program is to increase the awareness of media representatives about digital services, to contribute to the education of the population in the field of e-services, as well as to expand the use of these services. The program was first implemented in June of the current year and aroused great interest.

It should be noted that EGDC has developed “myGov”, “ASAN login”, “ASAN Finance”, “ASAN pay”, “ASAN visa”, as well as “e-Procurement”, “e-agro”, “e-auction”, permissions system of the State Advertising Agency of the Republic of Azerbaijan, “The System for Obtaining and Monitoring Permissions during the Implementation of Special Quarantine Regime” and other electronic projects and made them available for the use of citizens.

The 2nd “Towards Digital Journalism” program has finished

Azerbaijan attended the next meeting of the Committee on Artificial Intelligence

The meeting related to “YASHAT” Foundation was held with bloggers

“The System for Obtaining and Monitoring Permissions” has been restored again