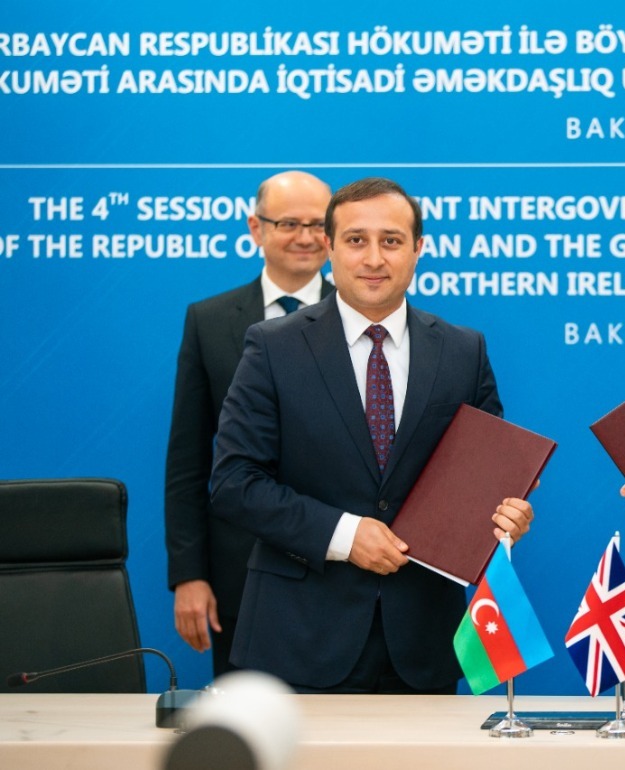 The 4th meeting of the Joint Intergovernmental Commission on Economic Cooperation between the Government of the Republic of Azerbaijan and the Government of the United Kingdom of Great Britain and Northern Ireland was held on May 20. At the event State Agency for Public Services and Social Innovations under the President of the Republic of Azerbaijan was represented by Fariz Jafarov, Director of the E-GOV Development Center (EGDC). F.Jafarov made a presentation on the application of artificial intelligence in the e-government services of Azerbaijan, spoke about the use of artificial intelligence technology based on sound and recognition in the "ASAN Login", machine learning solution applied in "ASAN Visa" and the concept of an artificial intelligence-based self-service “ASAN service” center.

During the event, the Protocol of Intent in the field of digital government was signed between EGDC and the Digital Government Service of the United Kingdom of Great Britain and Northern Ireland.

The Protocol of Intent signed between the United Kingdom, which is a leader in the e-government development index, and Azerbaijan, which has made significant progress in building e-government, covers issues such as bringing together expert communities and expertise, organizing digital public services for all users, and adhering to an open standards policy. The Protocol of Intent also agrees on the use of open source technology, management that avoids unnecessary expenses and increases the value of money, development of framework and procurement reforms, support for digital services accessible to everyone and other principles.

In addition to the Digital Government Service of the United Kingdom of Great Britain and Northern Ireland, EGDC has established extensive cooperation and continues this cooperation successfully with the Office of Digital Transformation of the Presidential Administration of the Republic of Turkey, Estonian Academy of Electronic Management, Korea International Cooperation Agency, German Society for International Cooperation, UN Department of Economic and Social Affairs, Council of Europe Committee on Artificial Intelligence, “VFS” Global and with other international partners.