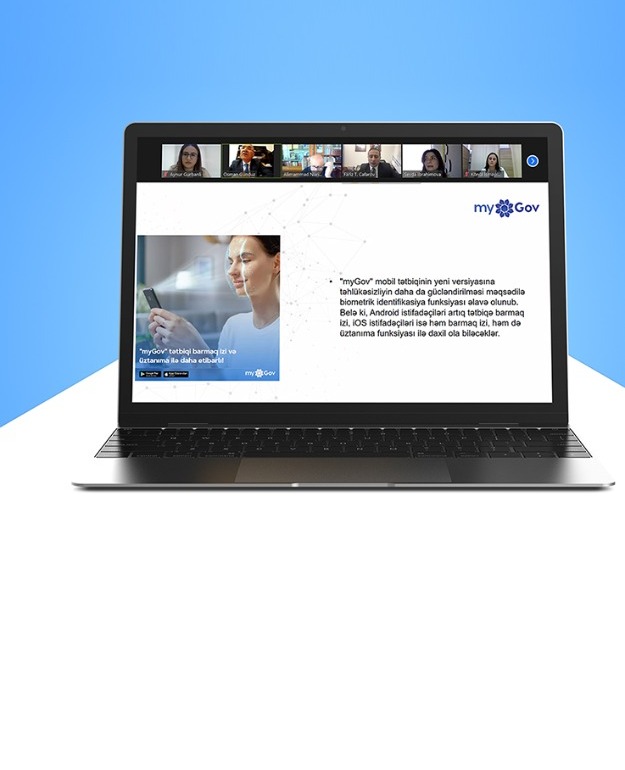 The next meeting of the “Public Council on Electronic Services Promotion” under the State Agency for Public Service and Social Innovations under the President of the Republic of Azerbaijan was held on April 15. At the meeting, which took place in an online format, new features for mobile application of “myGov” personal cabinet- based e-government platform were presented to the Public Council.

Fariz Jafarov, director of the E-GOV Development Center, emphasized the importance of holding such meetings and discussions.

The new features created in the mobile application of the e-government portal “myGov” were presented to the participants of the meeting. It was noted that to further enhance security a biometric identification function was added to the new version of the mobile application "myGov". Android users can now access the app with a fingerprint, iOS users can access both with a fingerprint and a face recognition. According to comments from the Play Store, it was noted that the citizens evaluated the new service positively.

Members of “Public Council on Electronic Services Promotion” expressed their gratitude for the information and emphasized the importance of continuation of optimization and improvement works.

During the event, it was noted that “myGov” is a personal cabinet- based e-government portal that informs citizens about personal, financial, property, education and other information.

Citizens who creates an account on “myGov” have the following advantages:

● The obligation to physically transport documents is eliminated;

● Certificates are obtained from only one source;

● Access to state portals from one source is provided;

● Citizens receives notifications of changes in their information;

● Opportunity for feedback with institutions;

At present, more than 500,000 citizens are registered on the portal, and the number of use of the services is about 15.7 million. Along with the integrated systems, “myGov” provides citizens with access to more than 700 e-services.

The participants of the meeting were also informed about the certificate from the e-government portal and the results of the research conducted in the direction of certificates and prepared proposals based on this result.