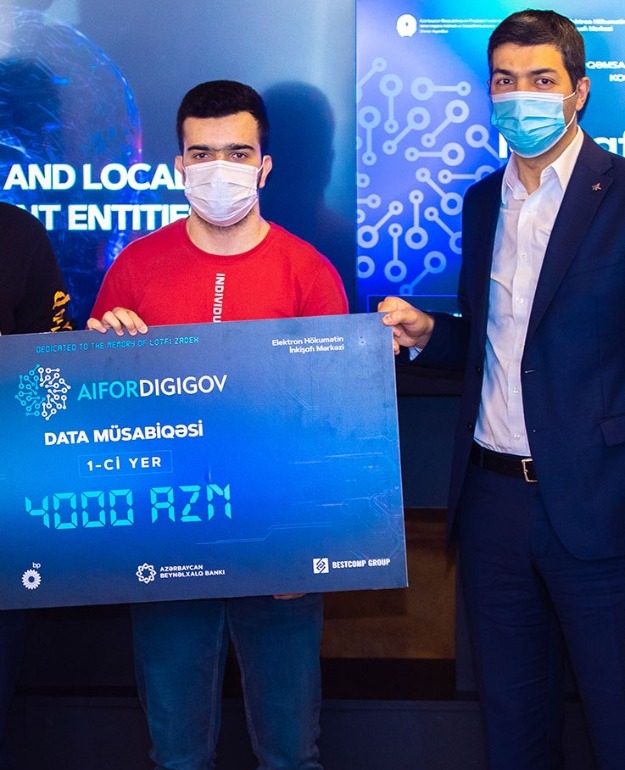 Awarding ceremony of the winners of the data competition held within the framework of the international conference "Artificial Intelligence in Digital Governance" were held on April 30.

Heads of various government institutions and technology companies attended at the event.

Opening the event, Fariz Jafarov, Director of E-GOV Development Center, emphasized the importance of adaptive responses to challenges in the world in the field of artificial intelligence, and spoke about the measures taken in this direction in our country.

Deputy Chairman of the State Agency Jeyhun Salmanov emphasized the importance of cooperation between private and public-academic organizations for the challenges of artificial intelligence. It was noted that the establishment of this cooperation at this event will allow to achieve successful results in accordance with the instructions of the country's leadership.

Rashad Azizov, a representative of the Ministry of Transport, Communications and High Technologies, emphasized the importance of such measures in our country in this direction, including the establishment of e-government.

185 teams have registered to participate in the data competition. The purpose of the data competition was to identify specialists in this field in Azerbaijan, to establish future cooperation with them and to implement new projects in the future. The “Kaggle” platform where the competition was held is an online community of amateurs and professionals in the field of data science and machine learning. Through this platform, which covers 194 countries with more than 5 million users large-scale and data-driven issues with a large scope from different areas of activity were addressed by team or individual competitors.

At the award ceremony, young people who participated in the data competition as a team and won were awarded. The first place winners Jamil Alizade, Kamal Agayev and Mikayil Yusubov were awarded AZN 4,000, the second place winners Tarlan Jabiyev and Turgut Abdullayev AZN 2,000, and the third place winner Elshan Gadimov AZN 1,000 prizes, certificates and gifts. During the event, certificates and gifts were presented to the participants who distinguished themselves in the competition.

The international conference dedicated to the memory of world-famous scientist Lotfi Zadeh was held with the sponsorship of “PASHA Holding”, “the International Bank of Azerbaijan”, “BestComp” and bp.

Detailed information about the event: https://ai4digigov.com/