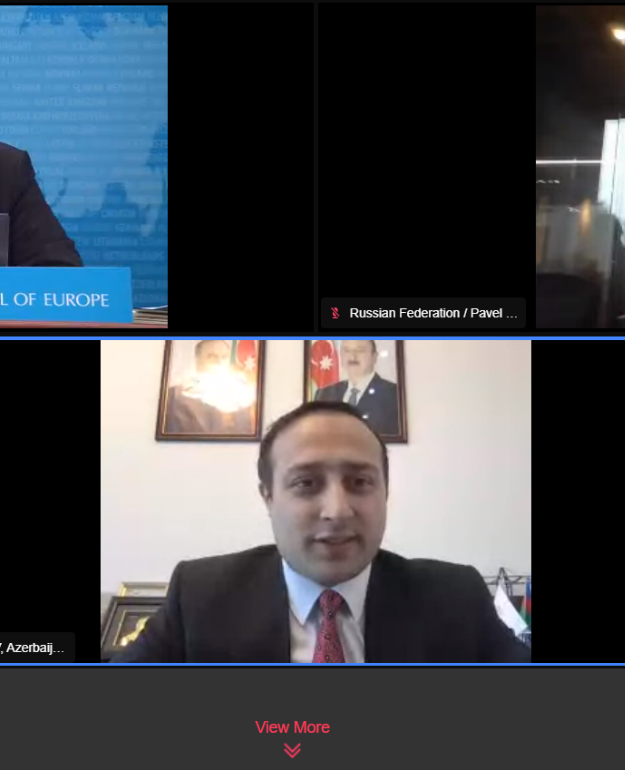 On July 6-8, 2020, Azerbaijan was represented at the Second Plenary Session of the Ad Hoc Committee on Artificial Intelligence (CAHAI) established by the Committee of Ministers of the Council of Europe (CoE). Fariz Jafarov, Director of the E-Gov Development Center (EGDC) subordinate to the State Agency for Public Service and Social Innovations under the President of the Republic of Azerbaijan attended the session. The event, intended to be held in March in Strasbourg, France, was postponed due to pandemic and was organized online as a result of the final decision of the delegations of the member states of the Committee in the online voting.

On the first day of the plenary session, the Chairman of the Ad Hoc Committee on Artificial Intelligence (CAHAI) briefed the participants on relevant innovations and information. The Committee discussed the opportunities and risks arising from the design, development, and application of AI on human rights, rule of law and democracy, as well as “green” and “red” areas, as well as the mapping of international binding and non-binding instruments, and of ethical guidelines.

On the second day of the plenary session, the Committee discussed the scope of a Council of Europe legal framework on AI, including the opportunity to define AI, as well as the main elements of a legal framework for the design, development, and application of AI. The Committee was informed about the main updates at the domestic and international level as regards policies.

On the third day of the plenary session, representatives of registered member states gave their contributions on “Possible practical mechanisms to ensure compliance and effectiveness of the legal framework”. The United Nations (Secretary-General’s High-level Panel on Digital Cooperation and UNESCO), The European Union, The Organization for Economic Co-operation and Development presented its ongoing work on artificial intelligence with the CAHAI’s work. On the last day of the plenary session, the Committee adopted the abridged meeting report and the date and place of the next Plenary meeting were discussed.

The purpose of the Ad Hoc Committee on Artificial Intelligence based on extensive multilateral consultations is to investigate the feasibility and potential elements of the legal framework for the design, development, and application of Artificial Intelligence based on the Council of Europe's standards of human rights, democracy and the rule of law. The Ad Hoc Committee on Artificial Intelligence includes representatives of all member states. Experts of relevant structures of the Council of Europe (CoE), European Union, Organization for Security and Cooperation in Europe, The Organization for Economic Co-operation and Development, specialized agencies of the United Nations, Internet companies that are partners of the Council of Europe and representatives of observer states, civil society organizations also attends at the plenary sessions of the Committee.