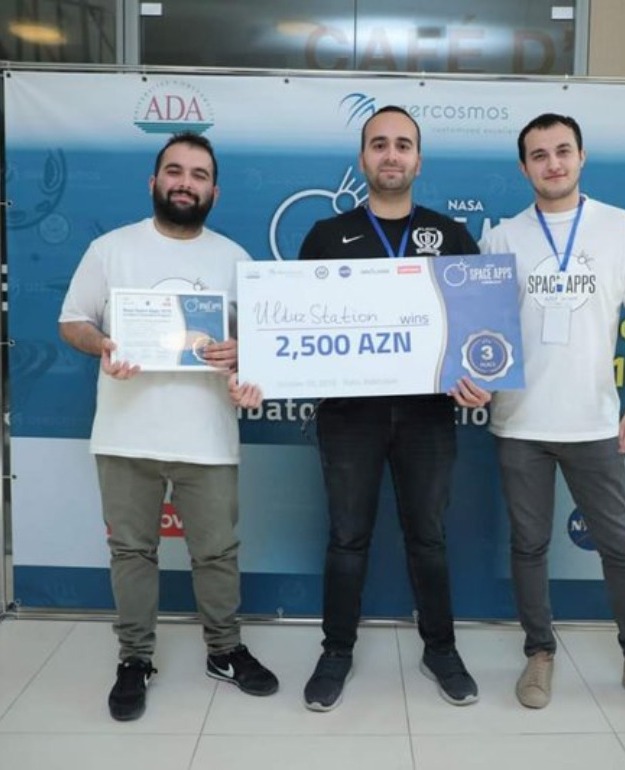 “NASA Space Apps” hackathon, considered one of the most prestigious competitions in the world, was held with the organization of “Azercosmos” OJSC, ADA University and U.S. Embassy in Azerbaijan and with the partnership of National Aeronautics and Space Administration (NASA) of USA, INNOLAND Incubation and Acceleration Center of State Agency for Public Service and Social Innovations under the President of the Azerbaijan Republic. The hackathon was sponsored by official representative of Lenovo company in Azerbaijan (Hackathon is the realization of an innovative idea by the people who have a common opinion gathered together during the given period of time). About 50 teams from various government agencies and organizations, private companies and educational institutions registered at “NASA Space Apps” Azerbaijan hackathon, which supports ideas regarding cosmic field. 100 participants from 25 teams, who won the right to participate, worked continuously for 48 hours to find ways to solve the tasks given by NASA. The team that developed the three best solutions from those teams was declared the winner of NASA Space Apps Azerbaijan hackathon. The winner of the first place was “ICARUS”, the winner of the second place was “SpaceSetup”, and the winner of the third place was the “Ulduz Station” team consisting of  the staff of the E-Government Development Center. "Welcome back" and "October sky" teams got a chance to pass the 6-months incubation program at INNOLAND.

The main goal of “NASA Space Apps Azerbaijan” hackathon being held in Azerbaijan is to gain experience in understanding the Earth and space, to investigate climate change on the planet and its impact on the wildlife, discovering the potential of Azerbaijani youth in space exploration, to train new generation of young people (Space generation) on the successful implementation of Azerbaijan Space Program.